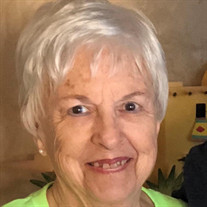 On July 15, 2020, Beverly Mae Andrus loving Mother, Grandmother, Great-Grandmother, companion and friend passed away at the age of 82, surrounded by her family. Beverly was born April 29, 1938 to Gaylord and Verla (Hall) Conrad in Portland, Oregon. The family moved to Pasco in 1942, where she graduated from Pasco High School in 1956. On July 29, 1956 she married Ken Coffland and they raised two sons Bob and Dan. Together they owned and operated several local businesses including the Forty-Niner and Speedy's Drive-In. After the drive-in days, they focused on their real estate and rental properties. After their divorce in 1983, Beverly was very involved with the Pasco High Marching Band, Cavalcade of Bands and the Band Booster Club. This is where she met her second husband, Max Andrus. They were married in 1983, moved to Houston then Chicago, until Max's death in 1985. Beverly moved back to Pasco and kept herself busy by working at Clearwater Travel. She loved being a travel leader for small groups, traveling around the world meeting new people and making many friends along the way. She always looked forward to the entire family getting together at her cabin in Tollgate, OR; snowmobiling, four wheeling and huckleberry picking. In 1989 Bev met Dave Rouse, her life companion. They lived in the Tollgate Area for 17 years where they were heavily involved with the Tollgate Trailfinders Snowmobile Club. They traveled the states by RV for several years until they settled for the winters in Yuma, AZ. Bev never knew a stranger, everyone was always welcomed and made to feel that she had known them forever. She was known to give the best hugs. She loved visiting with her children, grandchildren and great-grandchildren, friends and following them on Facebook. Bev was preceded in death by her parents, Gaylord and Verla Conrad, and her second husband Max Andrus. She is survived by her loving partner Dave Rouse, sons; Bob (Kathy) Coffland, Dan (Tiffany) Coffland, Grandchildren: Amanda (Scott) Palmer, Katie Ellingsworth, Samantha Coffland, Spencer (Heather) Coffland, Ariel Coffland, Sheyenne Coffland and 10 great-grandchildren. Bev will be dearly missed by all whose lives she has touched. The family would like to thank Chaplaincy Health Care for their comfort and support over the last few months. A Graveside Service will be held at City View Cemetery Friday, July 24th at 11:00. In lieu of flowers, the family is requesting donations be made to Chaplaincy Health Care 1480 Fowler St, Richland, WA 99352.

On July 15, 2020, Beverly Mae Andrus loving Mother, Grandmother, Great-Grandmother, companion and friend passed away at the age of 82, surrounded by her family. Beverly was born April 29, 1938 to Gaylord and Verla (Hall) Conrad in Portland,... View Obituary & Service Information

The family of Beverly Mae Andrus created this Life Tributes page to make it easy to share your memories.