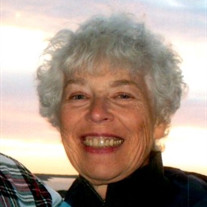 Beverly Marie Aiello, age 80, passed peacefully into the arms of Jesus on New Year's Day 2021. Bev was born in Montoursville, PA on November 29, 1940 to parents Beatrice and Berlin Allison. Her sister Betty along with her husband Jack and niece, Shaula continue to reside there. Beverly attended Mansfield University in 1962, graduating with a music education degree emphasizing the piano and trumpet. Bev was an amazing musician that would play any time anywhere for the enjoyment of those around her. Bev met her future husband, Frank, in college and they married December of 1963. They have two wonderful sons, Francis (Fran) Jr. and Neil. Fran and his wife Kathy have a daughter Emilie (18) and Neil and his wife Shannon have a blended family with Kelsey (26), Amy (24), Benson (15) and Allison (10). To see the most beautiful smile and blue eyes, all you had to do was mention the names of Bev's grandchildren. Bev was a lover and teacher of all things music. She taught at all levels of the educational system, from New York, to Illinois and Seattle. After settling in the Tri-Cities in 1978, she ended her career teaching at Carmichael Middle School in Richland when her health forced her retirement in 1992. Even today, so many years later, our family still hears fond memories of Bev from former students and fellow teachers. Bev was the backbone behind helping Frank begin their hearing business in Richland in 1978. Forty-three years later, that fledgling business (Columbia Basin Hearing Center) is still serving the Tri-Cities and Walla Walla under the care of son Neil and wife Shannon. Bev's life was full. Between raising her sons and loving her husband, being a friend and teacher and helping with the business. She always found time to listen to the boys when they needed to talk. Usually in the kitchen making pizza before the big boxing match. Or while having a "work end" on a Saturday in the garden. She continued that tradition with her grandchildren. Moving out to the glider on the back porch to eat fudgesicles or to share a cup of tea in a "thin lipped" cup with her daughters-in-law. When Bev was given a respite of several years without several years of health setbacks, she and Frank seized the opportunity to travel. First was a road trip with friends to Italy beginning in Rome and staying in Tuscan hill country in an old villa. That triggered two more trips to southern Italy, Sicily and Greece. Bus tours throughout western Europe were followed by independent tours of England, Scotland, Spain, New Zealand and Australia. Since luggage became heavier as they got older cruising was the new norm. Circumnavigating south America was an amazing voyage. Travel ended with a Caribbean tour in 2015. Bev was a treasure who through all of her many health challenges (multiple cancers, incurable bronchiectasis, and double knee replacements to name a few), had an indomitable, unrelentingly positive spirit. Her love for the Lord and her family kept her strong and pushing forward. She was a peacemaker by nature and a fierce fighter by necessity. We love you Bev, and will live our lives to the fullest as part of your legacy. Per Bev's wishes, a party of remembrance will be held in the back yard this summer. And we can guarantee there will be music! Special recognition is given to her 20+ year internal medicine Dr. Clar de Jesus, Dr. Glen Zuroske, the Staff at Regency Canyon Lakes Rehab, Chaplaincy and Pastor Paul Edwards of South Hills Church.

Beverly Marie Aiello, age 80, passed peacefully into the arms of Jesus on New Year's Day 2021. Bev was born in Montoursville, PA on November 29, 1940 to parents Beatrice and Berlin Allison. Her sister Betty along with her husband Jack and niece,... View Obituary & Service Information

The family of Beverly M. Aiello created this Life Tributes page to make it easy to share your memories.