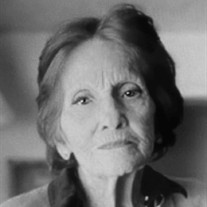 Betty Rae (Keith) Hammack, 95, died at home Nov. 14 surrounded by her children and grandchildren. She was born in Kansas, Oklahoma to Stella C. (Harp) and William B. Keith, the fifth of 11 children. She grew up working hard on the family farms and going to deliveries with her mother who was a midwife. After graduation from Kansas High School in 1943, she moved to Tulsa where she completed business school. There she had several jobs, including building P­- 38 Lightnings at Spartan Aircraft Co., a real life "Rosie the Riveter." In 1945, she went to Yakima, Washington to visit family and worked as a waitress at the bus depot. There she met a handsome soldier, Sgt. Charles Hudson Hammack from Alabama on leave from Fort Lewis. They were married Aug. 4 1947, in Tulsa. They moved to Kennewick and both began work in the Hanford area. Betty worked for GE in accounting until 1955 and the birth of her daughter Rebecca. Her son Timothy was born in 1958. Betty became a favorite of the neighborhood kids, playing, climbing trees, and always keeping cookies and ice cream on hand. She was a "mom" and later a "grandma" to many. There was always a place for you at Betty's. Later she began classes at CBC in nursing, first completing her LPN in 1966 and later her RN in 1978. She worked as a nurse for 34 years, mostly at Kadlec Hospital in the ER and CCU. She was known for her professional competency, feisty personality and winning the respect of doctors. She retired in 2000. Of the many jobs and roles she held throughout her life, her favorite was being "Grandma Betty" to her girls, Melissa and Deanna. Throughout the years she was their childcare, carpool, and biggest supporter. She was so proud of both of them and loved being in their lives. Betty had a strong faith in Jesus Christ and attended Kennewick First Assembly of God for over 60 years. Many of her long-term friends were from her church family. Betty was known for being a caregiver and helping people no matter their situation and often used her medical knowledge. She had an open heart and a sharp wit and even in her later years remained focused on the well-being of others. She was preceded in death by her beloved husband Charles; her parents; her brothers Dale, W.B., Roy, Dennis, Frank and Gary Keith; and sisters Barbara Brown, Billie Austen, Imogen McAlister and Reba Keith. She is survived by daughter Rebecca; son Tim and wife Vickie; granddaughters Melissa and Deanna; and numerous nieces and nephews. The Hammacks thank their family and friends for the love, support, and remembering the amazing woman that Betty Rae was.

Betty Rae (Keith) Hammack, 95, died at home Nov. 14 surrounded by her children and grandchildren. She was born in Kansas, Oklahoma to Stella C. (Harp) and William B. Keith, the fifth of 11 children. She grew up working hard on the family farms... View Obituary & Service Information

The family of Betty Rae Hammack created this Life Tributes page to make it easy to share your memories.