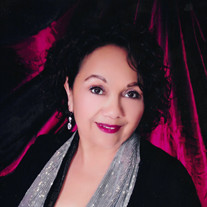 On a beautiful Sunday morning, God reached out his hand and took our beautiful Mother, Sister, and Nana home to live an eternal life free of pain and suffering. Betty Cerrillo passed peacefully with her daughters at her side on April 26, 2020 at Trios Hospital. She was born to Lupe and Joan (Elizondo) Torres on March 4, 1944 in Torrington Wyoming. Her family moved to the Yakima Valley and settled in Outlook before moving down the road to Sunnyside. As a young girl, she contracted tuberculosis and spinal meningitis and she was given no chance of survival but if you knew Betty, you knew that she was a fighter and always defied science. God wasn't done with his good and faithful servant and He had much more in store for her life. Betty received her education in Outlook and Sunnyside and graduated from Sunnyside High School in 1962. She was gifted with a beautiful voice and sang in her school choir and with her sisters in a trio called the Torres Sisters. They sang at various fairs and shows where they would showcase their talent. After high school, Betty attended beauty school in Yakima and earned a cosmetology license. As a hair dresser, she loved her clients and made many lifelong friends. She could talk for hours with those who sat in her chair and everyone that left Bee-Cee's Salon looked like a million bucks. In 1967, Betty married Ray Cerrillo and for the next 20 years they made their home in Grandview where they raised their two daughters DeAnne and Karisa. After their divorce, Betty eventually moved to the Tri-Cities and went to work at JCPenney's where she sold cosmetics and fragrances for 12 years. She even won a trip to Paris as a result of winning a corporate sales goal contest. Betty then went to work at Macy's to sell cosmetics until her retirement in 2016. She had such a passion for her job and knew how to sell the importance of good skin care. Betty was never afraid to share her faith with the world and would pray over anyone, anywhere at their request. In March 2016, Betty suffered a severe stroke that would leave her unable to talk, eat, move or walk. Over the next few years, God showed himself in the miracles that allowed her to regain her ability to talk, eat, and move her arms. Although she never regained her ability to walk, she could sing again, laugh again and was worshipping her Lord and Savior out loud once again. The last four years of Betty's life were a struggle but she never lost her faith. As a result of her still being on this Earth she was able to see two of her grandchildren get married and her youngest grandson graduate from high school. She spoke often about how ready she was to go home to meet Jesus and reunite with her parents and all of the other family members that had passed before her. She will be greatly missed but the memories that we shared with her were of love, laughter, and unshakable faith. She is finally where she wanted to be. Betty is preceded in death by her parents Lupe and Joan Torres, her grandson Dustin Usher, her brothers Richard, Nick and Bob Torres, her Aunt Bonnie, and all other family members that have gone before her. Betty is survived by her daughters DeAnne Wiley (husband Joe) and Karisa Usher. She was an amazing Nana to Osten Cerrillo (wife Andrea), Megan Hafner (husband Lewis), Katie Ekberg (husband Joshua), and DJ Usher. Betty was also a loving and caring sister and aunt to her 14 brothers and sisters and 33 nieces and nephews. At this time, there is no service planned until large groups are able to reconvene. When possible, we will have a Celebration of Life to come together and share as we reflect on the life of this most beautiful Godly woman.

On a beautiful Sunday morning, God reached out his hand and took our beautiful Mother, Sister, and Nana home to live an eternal life free of pain and suffering. Betty Cerrillo passed peacefully with her daughters at her side on April 26, 2020... View Obituary & Service Information

The family of Betty Cerrillo created this Life Tributes page to make it easy to share your memories.

On a beautiful Sunday morning, God reached out his hand and took...