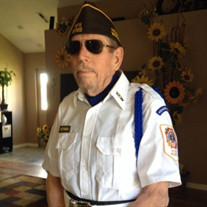 Bennie "Ben" Rae Welch, Jr. Ben was born October 2, 1942 in Wichita, Kansas to Juanita (McClellan) and Bennie Welch, Sr. He was the oldest of two boys. Ben married Joyce Palms on February 2, 1968 in Chula Vista, CA and had a ready-made family. They welcomed twin girls later that year to complete their family. Ben was preceded in death by his parents; wife, Joyce; significant other, Alice; stepson, Keith; daughter, Belinda; and most recently, brother, Ron. Ben is survived by Sussie Campobasso, his significant other as well as his loving dog, Whiskey; his daughter, Bonnie (Calvin) Gagnon; stepdaughter, Cindy (Ken) Ellis; eight grandchildren and thirteen great-grandchildren. He leaves behind many friends and extended family members as well. He was blessed to have three wonderful women in his life. Joyce was his first and the mother to his children. They were married for 32 years. After her passing, he met Alice and they were together until her passing in 2014. Then he met Sussie (Ardeene), who has been by his side until his passing. Ben was active in many organizations including the American Legion and VFW, serving with the Honor Guard and as Post Commander of Post 5785. He served honorably in the U.S. Navy for 4 years including in Cuba during the Cuban missile crisis. He volunteered with Selah Police Department as well as worked for the Washington State Patrol and the Washington Utilities and Transportation Commission. He worked with the Federal Railroads ensuring safe transportation of Hazardous Materials. He worked for the State of Washington for over 30 years. Ben was a caring father and grandfather. He loved to tell stories of his childhood. His stories of his amazing, eventful, and exciting career were also hilarious and historical. He would be the first to laugh at a funny story or joke and make you smile with his contagious laugh. He loved being outdoors. After meeting Sussie, he loved to go visit her hometown of Republic, WA. He enjoyed the town, the people and spending time at the shooting range. In lieu of flowers, please make donations to the Tri-City Cancer Center or the VFW. A graveside service is planned for Thursday, June 10, 2021 at the Desert Lawn Memorial Park on the corner of 10th and Union in Kennewick, WA (in the military part, look for the tank).

The family of Bennie Rae Welch created this Life Tributes page to make it easy to share your memories.