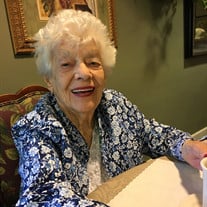 Barbara L. Lombard Long-time resident of Pasco, Barbara Lombard, joined the angels in heaven Sunday September 27, 2020. Born July 21, 1923 in Beaverton, Oregon, Barbara grew up on the family farm along with three brothers and five sisters. Barbara loved the farm especially the garden vegetables and flowers. Barbara met her husband Eugene while they worked together at the Montgomery Wards store in Portland. In 1946, they married and by 1948 moved to the Tri-Cities during the Hanford boom. Barbara worked several years at Camp Hanford in the commissary and later worked at a local yearbook publishing company in Pasco. Barbara and Eugene raised a family of four children Patrick, Barbara, Steven and Anita. She is survived by her four children and spouses Patrick (Martha) Lombard, Barbara (Alan) Gray, Steven (Diane) Lombard and Anita (Michael) Brambley as well as six grandchildren Jennifer, Steven, Rachel, Jonathan, Derrick, Kyle and eight great grandchildren Samantha, Jacob, Liam, Caroline, Kamden, Kaleb, Emmitt and Freya. She will be remembered for her tenacity in life, her love for gardening, growing flowers and vegetables and especially enjoyed working puzzles with the family into her late 90's. A private family service will be held Monday, October 5th at Mueller's in Kennewick where she will be laid to rest next to Eugene her husband of 56 years. In lieu of flowers, please make contributions to St. Patrick's Catholic School at 1016 N. 14th Ave, Pasco, WA 99301.

The family of Barbara L Lombard created this Life Tributes page to make it easy to share your memories.