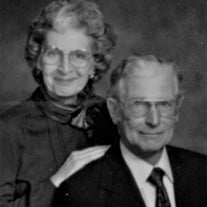 Barbara B. Anderson passed away peacefully in her sleep on December 17, 2021, at her new home in Kennewick, Washington surrounded by her loving family. Just three weeks shy of her 98th birthday, she had lived a full, wonderful, and healthy life... View Obituary & Service Information

The family of Barbara Grace Anderson created this Life Tributes page to make it easy to share your memories.

Barbara B. Anderson passed away peacefully in her sleep on December...