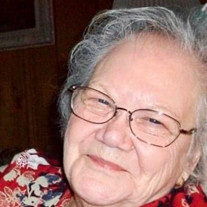 Arthena Ellen (Dotson) Goddard was born on January 23, 1934 in Clayton, West Virginia and passed away on July 30, 2021 at Lourdes Medical Center in Pasco, Washington as the result of complications with COVID 19. She was preceded in death by her husband of 57 years, James Keith Goddard, parents Cartha and Rachel Dotson, sister Phyllis (Dotson) Hedrick, grandson Marshall Goddard, and great-grandson Dustin Dutt. Arthena was a resident of Pasco for 63 years. She and her three children boarded a train in Prince, West Virginia in November of 1958 and travelled west to Pasco to join her husband who had come west looking for work. At the time, he was working for Northern Pacific Railway. Arthena and her children started attending Riverview Baptist Church along with her "best friend," Betty Johnson, and her children in May of 1965. This was where she made many lifelong friends for whom she was very thankful and never took for granted. Through the years she became an integral part of the church community where she cooked for church functions, signed for the deaf during services, helped at the church's Christian school and belonged to the "Widows Zone" group. Arthena will be remembered for her great cooking and baking skills, especially her fried potatoes, biscuits, coleslaw, West Virginia hot dogs and cinnamon rolls. Arthena is survived by her sister, Val (Bill) Carter, three children, Mike (Polly) Goddard, Merl (Linda) Goddard and Joyce Chambers. She is also survived by her grandchildren, James and Brian Goddard, Angela Dutt, Jennifer Peters, Jenelle Fabbro, Shaunna Waltemeyer, Jeff and Aaron Brooks, Nicole Munoz, Matthew Borup and 25 great-grandchildren, all of whom she loved and cherished. Funeral services will be held at 11:00 am on September 1, 2021 in the main auditorium of Riverview Baptist Church- 4900 W. Richardson Pasco, WA 99301. A private family interment will follow at Desert Lawn Memorial Park- 1401 S. Union St. Kennewick, WA 99338. In lieu of flowers, donations can be made to KOLU Christian Family Radio, c/o Riverview Baptist Church-4900 W. Richardson Pasco, WA 99301. The family, and especially Merl and Linda Goddard, would like to express a sincere "Thank you" to Michael Dotson Sr. of Mueller's Tri-Cities Funeral Home for all his help, support and kindness shown them through these difficult times. Your generosity and selflessness have not been taken for granted nor gone unnoticed. "THANK YOU."

Arthena Ellen (Dotson) Goddard was born on January 23, 1934 in Clayton, West Virginia and passed away on July 30, 2021 at Lourdes Medical Center in Pasco, Washington as the result of complications with COVID 19. She was preceded in death by... View Obituary & Service Information

The family of Arthena E Goddard created this Life Tributes page to make it easy to share your memories.