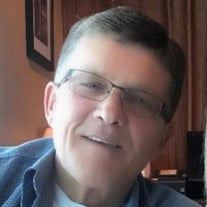 Arnold (Arnie) Lou Haag, 65 years 6 months and 14 days, went to be with his Lord and Savior Jesus after a valiant fight against Lung Cancer March 10, 2020 at his home in Kennewick with the love of his life by his side and surrounded by his 3... View Obituary & Service Information

The family of Arnold Lou Haag created this Life Tributes page to make it easy to share your memories.