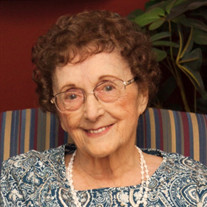 Arlene G. Andersen, 97, passed away on April 17, 2021 in Richland, Washington. Arlene was born on February 27, 1924 in Howell, Utah to Lorenzo Brown Gunnell and Lila Fern (Hendricks) Gunnell. Arlene married Preston Andersen December 18, 1941 in the Logan Temple, Church of Jesus Christ of Latter-Day Saints. They resided in Utah until 1954 when Preston and Arlene moved to Othello, Washington where they farmed in the Othello and Royal slope area. In 1961, they moved to Moses Lake where Preston worked in the tire business and Arlene worked for U and I Sugar Factory. In 1976, they made their home in Mattawa, WA where Arlene resided until 2008. Arlene lived at Riverton Retirement until her passing. Arlene and Preston served two missions for the Church of Jesus Christ of Latter-Day Saints, one to Rochester, New York and one in Apia, Samoa where she was known as the shell lady. Arlene served another mission after Preston died to Chicago, Illinois. Arlene was an active member of the Church of Jesus Christ of Latter-Day Saints and loved serving in various positions through the years. Arlene is survived by 3 daughters, Mona Hymas (Paul) Kennewick, WA, Marilyn Kendrick (Cordell) Boise, Idaho, Dee Ann, Richland, WA and 3 sons, Kent Andersen (Louise) Royal City, WA, Kenny Andersen (Sherry) Fort Worth, TX and Rick Andersen, Mattawa, Washington. A sister, Shirley Chambers, Moses Lake, WA, 25 grandchildren, 90 great-grandchildren, and 13 great-great-grandchildren. Arlene was preceded in death by her husband, Preston, her parents, two brothers, one sister and two grandchildren, Bonnie Kendrick Larsen and Todd Lorenzo Lublin.

The family of Arlene Hendricks Andersen created this Life Tributes page to make it easy to share your memories.