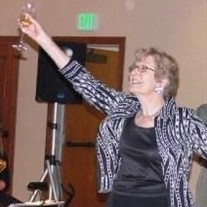 Ann Faust Taylor, long-time Tri-Cities resident, died on March 11, 2021 at Fieldstone Memory Care of Kennewick. Ann was born on May 29, 1928 in Rochester, MN, and grew up in Denver, CO. She attended Northwestern University and majored in Languages. Harvey Taylor, just back from the Navy after WWII, visited an old friend in the Delta Gamma sorority house and there was immediate mutual interest. They were married July 29, 1949. After three children and several moves, they ended up in Kennewick in 1961. Harvey worked at Hanford and Ann quickly immersed herself in the community. She campaigned for Dan Evans, joined the local P.E.O Chapter, was active with the local Delta Gamma sorority, volunteered with the Mid-Symphony Guild, and the ESL program at CBC. After Harvey passed in 1979, her volunteer work with CBC ESL program became a full-time teaching position. Ann's love of languages and travel took her all over the world. Her travelling and community involvement inspired Tri-City Cosmopolitan Travel agency to ask her to work in their office and she booked many tours for local residents. Ann had a curiosity about the world and love of nature. She became an avid bird watcher and felt strongly about the conservancy of land and nature. Her love of travel and nature culminated in her dream trip at 80 years of age to Antarctica. She is survived by her son, Mark Taylor of Monmouth, OR, her daughter, Lynne Taylor of Palos Park, IL, her daughter, Lee Taylor of Mukilteo, WA, her nine grandchildren; Kimberly Davis, Kiel Smith, Patrick Smith, Brandon Jennings, Sarah Bodtker, Emily Munn, Maximilian Smith, Julia Taylor, Harvey Taylor and her nine great-grandchildren; Taylor Davis, Elizabeth Smith, Liliana Smith, Eleanor Bodtker, Ada Munn, Isla Smith, Neil Munn, Penelope Phillips-Smith and Logan Bodtker, and her sister Sandy Faust Perkins of Kennewick, WA and her niece Ann Perkins and nephew Stan Perkins. In lieu of flowers, the family asks that contributions to the Nature Conservancy, the Audubon Society or the Great Old Broads for Wilderness. Internment will take place at a later date at Sunset Gardens in Richland, WA where she will be laid to rest next to her husband, Harvey Taylor.

Ann Faust Taylor, long-time Tri-Cities resident, died on March 11, 2021 at Fieldstone Memory Care of Kennewick. Ann was born on May 29, 1928 in Rochester, MN, and grew up in Denver, CO. She attended Northwestern University and majored in Languages.... View Obituary & Service Information

The family of Ann Faust Taylor created this Life Tributes page to make it easy to share your memories.