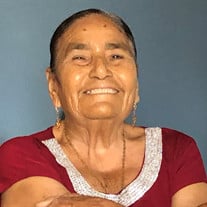 Angelina Valencia Quintana, age 85, of Pasco Wa. went to be in the arms of her Heavenly Father surrounded by her loving family at home on Sunday, April 4, 2021. Angelina was born on August 25, 1935 in Las Naranjas, Jalisco the daughter of Viviano and Guadalupe (Licea) Quintana. She arrived to the states in 1972 to California residing in Visalia, Bakersfield and Fresno where she began as a migrant-worker in the fields to provide for her 11 children that she singly devoted her life to all on her own being Mother and Father, after four years in California she moved to Washington State living in Vancouver, Brewster, Walla Walla and making Pasco her final permanent home in 1976 upon arriving to Pasco she worked for Rogers Walla Walla (a.k.a. Lamb Weston) for 24 years until she retired, she enjoyed her retirement traveling to and from Mexico, Texas and Washington State, she was a heartwarming loving mother, grandmother, mother-in-law, Tia and friend. She loved and adored all her children and grandkids she was slow to anger, very forgiving and always gave more than she ever asked for making sure others always had a plate of food her cooking was the best, everyone's favorite she made sure all the kids (neighborhood included) ate, she prided herself on the upkeep of her yard and garden she enjoyed watching wrestling with her son, the news in Spanish and English, Animal Planet, Sábado gigante, every novela, 12 Corazones, and can't forget the dramatic ones Laura, Casos Cerrados and Jerry Springer she loved a good fight. Angelina is survived by her loving children, Benjamin (Maria) Mendoza of Pasco Wa, Maria Valencia of Weslaco Tx, Irma (Saul) Chavez of Pasco Wa, Jaime (Anaderi) Valencia of Pasco Wa, Ernesto (Jacky) Valencia of Weslaco Tx, Jesus Valencia of Eagle Pass Tx, Dora (Heliodoro) Valencia of Pasco Wa, Uriel (Breanna) Valencia of Pasco Wa, 36 grandchildren 40 great-grandchildren and 2 great-great-grandchildren. She is preceded in death by her parents Viviano an Guadalupe, daughter Maria Valencia, daughter Genoveva Tavares, son Gabriel Mendoza and her two siblings Trinidad Mendoza and Herminio Quintana. Mass of Christian Burial will be held at St. Joseph's Catholic Church on Friday, April 9, 2021 at 1:00 PM.

Angelina Valencia Quintana, age 85, of Pasco Wa. went to be in the arms of her Heavenly Father surrounded by her loving family at home on Sunday, April 4, 2021. Angelina was born on August 25, 1935 in Las Naranjas, Jalisco the daughter of Viviano... View Obituary & Service Information

The family of Angelina Valencia Quintana created this Life Tributes page to make it easy to share your memories.

Angelina Valencia Quintana, age 85, of Pasco Wa. went to be in...