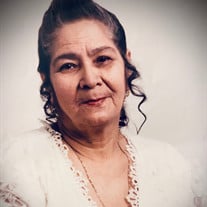 Amalia Camero passed away peacefully and was reunited with her family in heaven on February 5, 2020. She is survived by her adult children, Alma Camero, J. Angel Camero, and Rosa Camero; grandchildren, Juan F. Orozco, Imelda Orozco, Rosa Orozco, Paul Orozco, Diana Camero, Jackie Camero, Kathy Camero, Miguel Camero, Gary Marquez, and Carmen Marquez; and great grandchildren, Juan, Julian, Cristina, Natalia, Mariah, Pedro, Reyna, Osiris, Phoenix, Tina, and Mario. Amalia was born in Obregon, San Luis Potosi, Mexico and traveled to Texas as a young woman. She married Bernabe Camero and looked after his four children, Samuel, Romeo, Rosie, and David. She gave birth to Rosa and later to her twins, Angel and Alma. Amalia's children were young when she became a single parent. She had a strong will to survive and to provide for her children. She was a hard-working woman. She sewed clothing, helped others, and made candy from fruits she and her children collected from trees and bushes. They later moved to California in search for a better life. Amalia lived with her daughter most of her life; with her son, Angel, and his family nearby. In 1996, she moved to Tri-Cities, Washington with her daughter Alma and her family. She was surrounded by many of her grandchildren over the years and had the privilege of bonding with great grandchildren. Amalia was a great person and adored by many. She would joke and sing funny songs just to see you smile. She enjoyed the outdoors, especially the beach, and she loved flowers. But most of all, she loved being with family. She will be greatly missed, but never forgotten. The family would like to thank the doctors, nurses, and support staff from Trios Hospital, The Chaplaincy's Hospice Team, and ALTC's case manager, Griselda, and nurse, Kay for their loving care for Amalia.

The family of Amalia G Camero created this Life Tributes page to make it easy to share your memories.

Amalia Camero passed away peacefully and was reunited with her...