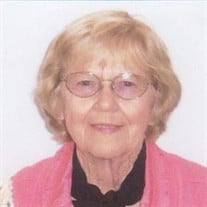 Alice Loretta Smith passed away in her home on October 6, 2021, after a short battle with lung cancer. For those who knew her it should come as no surprise that she did not “go gently into that good night”’ but “raged, raged against the dying of the light”. She was preceded in death by her husband Stoy R. Smith, parents Harry and Catherine Sites and 12 siblings. She is survived by sister Rita, children Bob (Jeanette), Rayn, (Kelli), Tammy (Jeff), Teri (Victor), and Linda. She also left behind eleven grandchildren, Tim (Casey), Jon (Jenny), Cody (Erica), Cole (Nicole), Kyler, Staci (Alfred), Rick, Chad (Jana), Ryan (Errica), Lori (Aaron) and Joleen. She also had seventeen great grandchildren who she doted upon whenever possible. Alice was born in Beach, North Dakota and moved to Western Washington in the ’30’s. It was there she met a young Marine, Stoy Smith, married, and after a short stint in Utah, settled on a farm in Bock 15, Pasco Wa. While raising five children and a few cousins, Alice worked several jobs and ultimately, she and Stoy partnered with Gordon and Lea Allan in owning and running Mathews Corner Market. Upon Stoy’s death in 1987, mom sold the farm and moved to Pasco. She worked many years in the travel industry, escorting groups all across the United States, Canada, Mexico and even England. In her later years she worked as a crossing guard and para educator until her retirement at the age of eighty. Alice loved working with the kids. Mom’s home was always open to friends and family. From her informal gatherings until our clan grew too large, to our weekly ‘Happy Hours”, Alice always welcomed and enjoyed guests. She was the glue that held family and friends together. Per Alice’s request a gravesite service open to family and friends, will be held October 20, 2021, 11:00 at Mueller’s Desert Lawn Memorial Park, 1401 S. Union St, Kennewick WA. A gathering will be held afterwards with location TBD. In Lieu of flowers, please consider making a donation to the Arc of Tri-Cities.

The family of Alice Loretta Smith created this Life Tributes page to make it easy to share your memories.