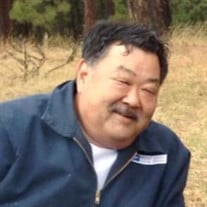 A celebration of the life of Alan Frank Ono will be held at 11:00am Saturday, January 15th, 2022, at the Livingroom Community Church, 1409 South Garfield Street Kennewick, WA. This can also be viewed Live at www.facebook.com/tlrcommunity. Interment to follow at City View Cemetery 1300 North Oregon Pasco, WA. We’ll return to the Livingroom Church for the reception. A public viewing will be available on Friday January 14th from 4:00pm-8:00pm at Mueller’s Greenlee Funeral Home 1608 West Court Street Pasco, WA. Alan Frank Ono, only child of Hideo F. Ono and Irene M. Ono was born on March 21, 1953, at Kadlec Hospital and after a valiant battle with COVID-19 passed away at Kadlec Hospital on December 28, 2021. A beloved son, husband, dad, papa, grandfather and brother-in-law, he lived his entire life in Pasco, WA. The Ono family were early pioneers of Pasco. A quilt at Franklin County Museum includes a patch showing the family tree with names and occupations. Alan’s occupation - 45 years at the Pasco Post office. His final position was lead clerk. A 1972 graduate of Pasco High School, Alan did some bench pressing but his mother introduced him to guns and competition shooting. Becoming quite adept, he won many ribbons and Trophy’s. It started a lifetime interest in guns. However, at 16 he purchased his dream car. Many of his peers and others recognize Alan and his famous 1970 lime green road runner. He kept it immaculately clean and used it for drag racing and met his wife Pamela Scharnhorst at the local A&W hangout while cruising. They dated for 4 years before marrying on February 3, 1979. Alan attended C.B.C in the automotive department. This helped with his car and eventual enthusiasm for dirt bikes and motorcycles. Alan joined the Army reserve and became a tanker. His earlier competition shooting led to a marksmanship medal in the Army Reserve. After marrying, Alan began work at the Post Office, Pam became a beautician, and they started a beautiful family. Alan was very proud of and supported his kids in school presentations and sports activities from grade school through high school. He willingly participated in what became traditions within the traditions of holidays. For example, Santa sock grab bags at Christmas. His favorite holiday was the yearly trip to Toppenish for fireworks before the 4th of July, then to the Legend Casino for its buffet. Though not holidays, everyone looked forward to Tucannon trips. April was for fishing and October deer and elk for hunting. Alan’s acquired expertise and knowledge in the use of firearms led many to come to him with questions. Often, gun dealers would comment that he probably knew more than they did. The only thing Alan loved almost as much as his family and friends were guns and his dog Muggsy. Alan laughed a lot and wanted you to laugh with him. His most used words were “Look at that!” When nothing was there or “Watch this!” “Watch this!” to share his favorite 70’s TV shows. His sense of humor was unique. Alan liked to do what he thought was funny then enjoy the reactions. Most recognized him as a prankster and would laugh along with him. Alan was excessively generous. He always had extra and if he thought you needed it, it was yours. Carnivals and Arcades dreaded him as a customer, but we benefited with numerous gifts from their shelves. He loved garages sales but then advanced to Goodwill becoming an aficionado at finding treasures for himself and others. Alan was a generous, loving, jokester who will always be loved and remembered. Alan was proceeded in death by his parents Hideo and Irene Ono. He is survived by his wife of 42 years Pamela Ono; one daughter Andrea Ono and grandson Kaidon Farnsworth, son Brandon Ono (Katrina) and grandchildren Alex, Emmett, Landon, and son Cameron Ono, all of Pasco. a Go Fund Me has been set up to help Alan's family, please visit https://gofund.me/3f9372d7

A celebration of the life of Alan Frank Ono will be held at 11:00am Saturday, January 15th, 2022, at the Livingroom Community Church, 1409 South Garfield Street Kennewick, WA. This can also be viewed Live at www.facebook.com/tlrcommunity. Interment... View Obituary & Service Information

The family of Alan Frank Ono created this Life Tributes page to make it easy to share your memories.

A celebration of the life of Alan Frank Ono will be held at 11:00am...