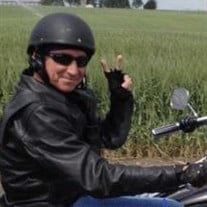 Alan Joseph McDonald, 58, of Kennewick passed away peacefully on January 25, 2021, at the Chaplaincy Hospice House in Kennewick. Alan was born on January 30, 1962, in Spokane, to Marjorie and James McDonald of Pasco. Alan overcame some serious health challenges as a young boy and went on to lead a productive life. He graduated from Pasco Senior High School in 1980 and later attended Washington State University in Pullman. After returning to the Tri-Cities, he worked at Battelle Pacific Northwest Laboratory. Alan then assumed management of the family vineyard and farm in Pasco. He enjoyed boating and water sports, snow skiing, riding his Harley, and other outdoor adventures. While serving as an active volunteer for Columbia Basin Dive Rescue, one of his proudest moments was helping with the historic rescue/recovery of "Kennewick Man." Alan's friends will tell you he was a man who was always there to lend a helping hand to both friends and strangers. He will be remembered for playing bass guitar in the PHS Jazz Band, a love of Ford Mustangs, his big heart, great smile, and warm hugs. Alan is survived by his sister, Patricia McMaster of Honolulu, Hawaii, nephew, Brian McMaster, of Honolulu, Hawaii, numerous cousins, and many dear friends Alan considered to be "family." He was preceded in death by his parents Marjorie and James McDonald and nineteen of his aunts and uncles. Due to COVID-19, a Celebration of Life Service will be held later in the year. Donations may be sent in Alan's name to: Chaplaincy Hospice House 2108 W Entiat Ave Kennewick, WA 99336 OR Seattle Children's Hospital Foundation PO Box 5371 Seattle, WA 98145

Alan Joseph McDonald, 58, of Kennewick passed away peacefully on January 25, 2021, at the Chaplaincy Hospice House in Kennewick. Alan was born on January 30, 1962, in Spokane, to Marjorie and James McDonald of Pasco. Alan overcame some serious... View Obituary & Service Information

The family of Alan Joseph McDonald created this Life Tributes page to make it easy to share your memories.