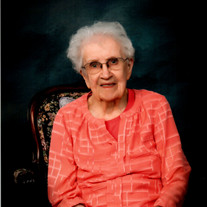 Addie, aged 102 years, born February 23, 1918 and passed on June 29, 2020, was the 6th of 9 children. The last to survive of the large Gilmore family of Finley, Washington. Her father was a depression era farmer who moved his family more times than can be counted. Each one of the 9 children was born in a different location. Addie was born in Hiawatha, Kansas and graduated high school in Hover, Washington. She then went to nursing school and worked many years at Our Lady of Lourdes Hospital in Pasco, Washington, retiring in 1980. In 1944, she married James Bryan from Pasco, the son of a jeweler and an optician. With Jim, Addie had a life of movement once again. They and their two daughters Patty and Dorrie, who were born on the same day, but 2 years apart, moved from Washington to Oregon and California, several locations, then to Idaho and back to Washington where they stayed until the girls were out of school. Then, wander lust struck again and Jim and Addie moved several more times in Washington then to Oregon and back to Washington again, finally settling in Kennewick. After 50 years of marriage, James passed and is buried in Pasco's City View Cemetery near his parents, D'Burt and Olga Strumpf Bryan. Throughout the years, Addie remained friends with classmates she had in grade school. She volunteered at Kennewick General Hospital where she sat at the front lobby desk and wore a big smile and a pleasant attitude. She also volunteered at the KGH Volunteer Center and the Trios Auxiliary where she was involved in many activities. She loved to sew and do needlework. Addie was preceded in death by her husband James Bryan and her daughter Patricia Ruth (Patty) Mathis-Toews. She was also predeceased by her parents Arvil and Minnie Cline Gilmore from Finley in 1950 and 1961 respectively. Her sister Tressie Bass died in 1940 in California. Her 7 brothers and all of their wives predeceased her, Leland in Louisiana, Marvin in Milton-Freewater, Winfield in Finley, Ira in Finley, Aaron in Sprague, Russell in WWII, and Roger in Long Beach, Washington. She was preceded in death by nephews Robert Bass in 1979, Edwin Gilmore of Oregon, Jim Gilmore, Wayne Gilmore, and Leland Gilmore all of Kennewick. She was preceded in death by a most trusted son-in-law, Bruce E. Scott in 2011. She is survived by her daughter, Dorothy (Dorrie) Scott of Kennewick, Washington. She is also survived by her 3 granddaughters; Tina and husband, Chris Bolten of Kennewick, Washington, Katie and husband, Shawn Corbaley of Spokane, Washington; and Lisa with husband, Eric Percival of Virginia. Her great grandchildren include Cassandra and husband, Alex Johnson of Kennewick, Nicole and husband, Noe' Lopez of Richland and Zack of Kennewick. Also, great grandchildren Sarah, Mark and Matthew of Spokane and Laird Percival and his sister Nyssa Percival Johnson with husband Daniel from Portsmouth, Virginia. Addie Mae was happy to become a great-great grandmother to 3 little girls ages 4 years and 1 born in February 2019 and another born on the 4th of July in 2019. Other survivors include 6 nieces whom she has been very close to including Linda Clark, Susie Bolton, Sally Reed, MaryAnn Seaton, Shirley Reese and Diane Gilmore. She is survived by 4 nephews including Russel, Ed, Richard and Robert Gilmore. She leaves behind spouses of her nieces and nephews including Dave Bolton and Kathie Gilmore and Danny Seaton, Jim Reed and Patricia Gilmore. There are many grandnieces and grandnephews whom she has developed good relationships. She will be missed by many long-time friends including from her volunteer groups and friends from her apartment building Parkview Estates in Kennewick, Washington. Services will be held using Coronia virus safety precautions at Mueller's Chapel of the Falls in Kennewick, Washington on 1st Avenue and she will be laid to rest next to her husband at City View Cemetery in Pasco, Washington on July 8, 2020.

Addie, aged 102 years, born February 23, 1918 and passed on June 29, 2020, was the 6th of 9 children. The last to survive of the large Gilmore family of Finley, Washington. Her father was a depression era farmer who moved his family more times... View Obituary & Service Information

The family of Addie Mae Bryan created this Life Tributes page to make it easy to share your memories.