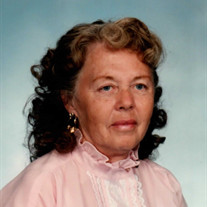 Adah Maxfield Knapstad, 1925-2021 Adah was born in Gordon, Nebraska to Clara and J. Clyde Maxfield. She was the sixth of seven children. The family moved to Kent, WA in 1936 where she graduated from Kent-Meridian High School. There, Adah played softball and after school sports. She also loved dancing. After graduation she worked as a bank teller. Adah met her husband, Howard Knapstad, and was married October 10, 1948. She was the loving mother of 5 children, Chris, Wayne, Dann, Connie and Sheila. Adah and Howard lived seasonally in Fairbanks, AK where she worked in the bank and Howard worked as a fisherman. He later became a carpenter and they built several family homes. They lived in Ellensburg and Moscow, ID before settling in Kennewick in 1965. They raised their family on a small hobby farm and Adah was a homemaker. After the kids were grown, she worked for the Kennewick School District. Adah and Howard had the opportunity to travel extensively abroad to Europe, Australia, and Japan. Her hobbies include: International Folk Dancing, Seasoned Steppers, and aerobics. She and Howard were members of the Sons of Norway for 25 years, Columbia Community Church since 1965, and she enjoyed being a 4-H leader of an equine club during the 1980's. Adah was preceded in death by Howard, son Chris Knapstad, son Dann Knapstad, and all of her brothers and sisters. She is survived by three children, Wayne Knapstad (Mary Lee) of Volcano, HI; Connie Fittro (Tim) of Peoria, AZ; and Sheila Jameson (Randy) of Kennewick, WA; six grandchildren: Sean, Mathew, Nikki, Melissa, Kyle, Spencer; and four great-grandchildren. A viewing will begin at 2pm on Monday, June 7 at Columbia Community Church on Gage Blvd, with funeral beginning at 3pm. A second service will be held on Wednesday, June 9 at Marlatt Funeral Home in Kent, WA, viewing at 2pm and service at 3pm. Adah will be laid to rest at Hill Crest Cemetery in Kent.

Adah Maxfield Knapstad, 1925-2021 Adah was born in Gordon, Nebraska to Clara and J. Clyde Maxfield. She was the sixth of seven children. The family moved to Kent, WA in 1936 where she graduated from Kent-Meridian High School. There, Adah... View Obituary & Service Information

The family of Adah Ethel Knapstad created this Life Tributes page to make it easy to share your memories.

Adah was born in Gordon, Nebraska...